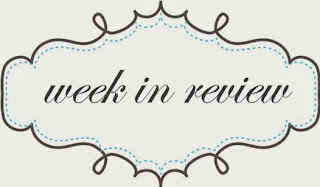 Awesome film, I know I am about 20 years late to this party, but I loved it, loved it. Pacino before his voice went all shouty and despite the beard and platform boots he was actually ok to look at. A LOT of dancing involved in this film too. Also, a lot of shooting and blood. Sidenote: Sean Penn was brilliant.

TV I Saw this week

I can't say anything for fear of giving something away, but Downton Abbey got REAL last weekend. To say I was shocked is an understatement.

The baby saw it too

Breaking Bad Season 3 on Netflix, yo.
Mr White earns his Reservoir Dogs name. Total winner, taking it steady because I don't want it to ever end. But it does. CRY.

Follow my blog with Bloglovin
Posted by Esther at 14:25