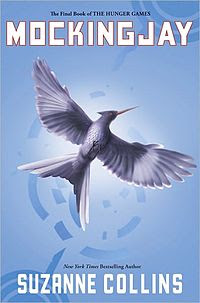 I had only just finished the second book in this trilogy, Catching Fire, but I could't wait to find out what happens to our little heroine, Katniss. I guess you can infer from that that I enjoyed this series of books; which I did, immensely. However, as the story has unfolded I have become more and more infuriated with Miss Everdeen and her glaring inability to read situations correctly. She has a annoying habit of gauging everyone's opinions of her as negative and is always assuming the worse outcome, unless, of course, something bad IS about to happen, and then she assumes the best.
While these personality traits worked just fine in the first book, when Katniss was young, niave and had been thrown into unexpected situations (you kinda had to feel for the girl) , by the time you reach this last installment it's wearing thin.
I found that Katniss didn't seem to grow in any tangible way emotionally, despite us having to go along with her second guessing every single one of her actions (unless she should have done -then she was spontaneous) and overthinking her relationships.
Basically, the girl needed a lot of things spelling out to her and it all became a little on the predicable side of realistic.
That being said, I had to carry on reading, there was no way I was leaving the Peeta and Gale story without an ending! I wasn't as bothered about the love triangle aspect, I just wanted to know they were both ok.
The ending was reminiscent of Harry Potter, I didn't feel it needed the quaint round up, presented with a ribbon on top.
But please don't let this review stop you from jumping into the books, they are really good.
I know I should qualify that with a reason, but to be honest I am too tired after dealing with the frustration of Miss Everdeen to talk about how engaging the first few books are. But, let me put it simply, if that's ok with you? - I read this series in a couple of days because I couldn't put them down, even though I wanted to shake the central character, which has got to be a first for me.
Posted by Esther at 09:43